On a recent trip to northern Thailand, I drove a Honda Click 160i. In less than 3 days, I drove about 300 kilometers along the ideal and deserted roads of the Thai province.

Before that, I had already ridden a Honda Click 150i in Hua Hin.

But on a permanent basis, I have a Honda Click 125i motorcycle, that is, with a less powerful engine. When buying a motorcycle, the question may arise, is it worth overpaying for a more powerful motor? Especially considering that the motorcycle will be bought for domestic needs, and not for racing.

Certainly there are 300i-600i bikes out there, but I'm going for practicality. On a small motorcycle, I can pass between cars and stand in the first row at a traffic light. On a large motorcycle, which may be slightly narrower than a car, this is not always possible. And therefore, despite the greater speed, large motorcycles in the city are SLOWER, and MUCH slower – about the same as cars.

When I look at big bikes, you know what I think about? Where to put/hang a bag with products from Big C??? And, in general, I do not find the answer. Based on this, I consider large motorcycles impractical in everyday life. Although, of course I like them in terms of show and speed.

Therefore, my little competition “in the second division” – cheap and small motorcycles.

But you must admit, 160i is serious! And although, according to the European tradition, motorcycles like the Honda Click are not even quite motorcycles, but rather scooters. But tell me, would you dare call a 160i-powered machine a scooter?

Well, in general, about the impressions.

On my motorcycle (Honda Click 125i) from 0 to 60-70 km/h, I can already accelerate while passing the intersection. Then a rather peppy acceleration to 100 km/h, and then a very leisurely acceleration to 110 km/h – my bike can’t go faster, well, it can be 115 km/h downhill. 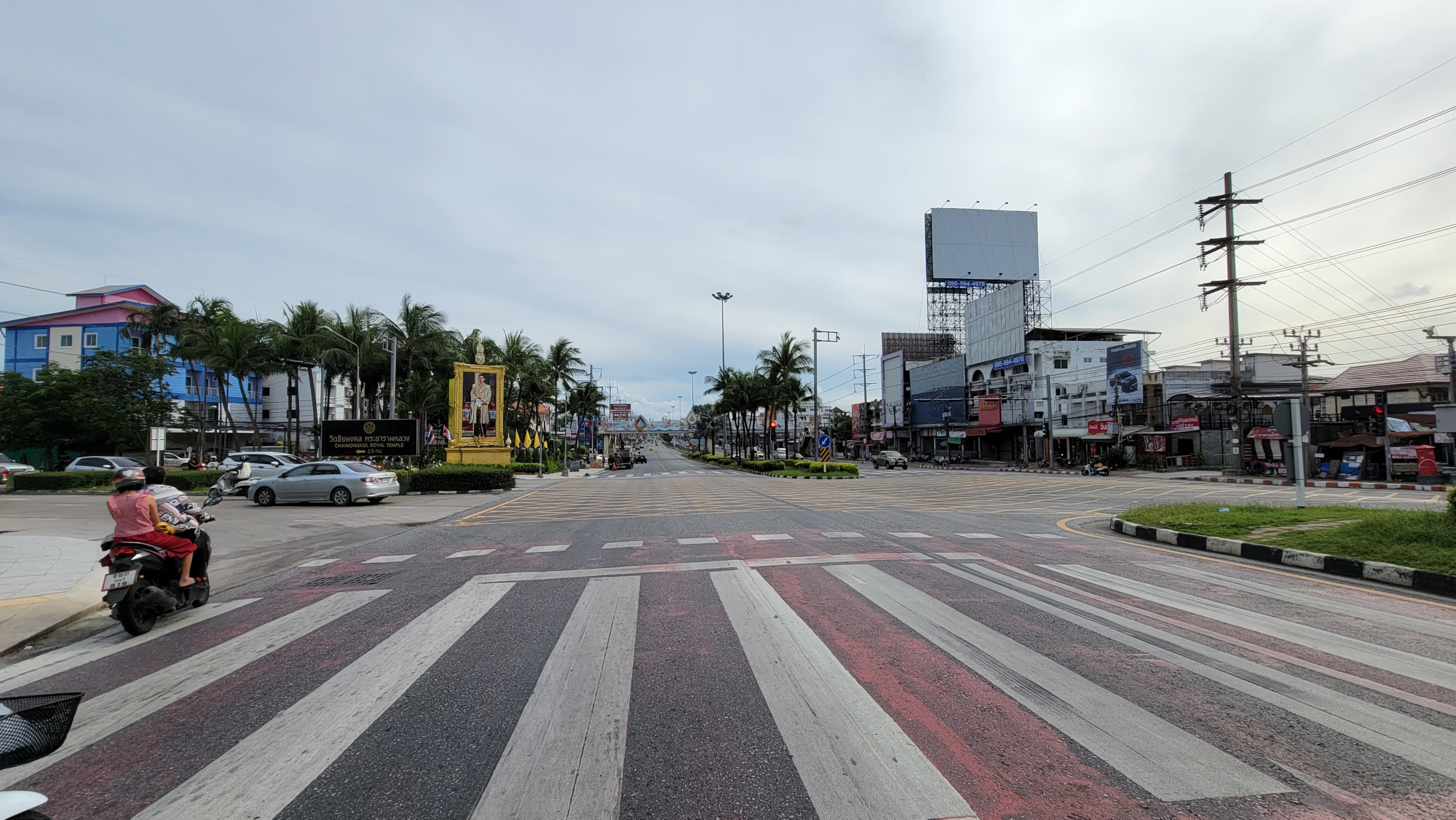 If there is also a passenger with me, or if I am going uphill, then the speed of 110 km/h becomes unattainable, the motorcycle accelerates to somewhere up to 100-105 km/h, that is, yes, this is not the most powerful and fastest motorcycle.

Motorcycle Honda Click 150i did not impress me much. I twisted the accelerator handle to the maximum and listened to my feelings. Feelings were not clear, more powerful or not. In the end, I came to the conclusion that when driving the Honda Click 150i, you still feel a lot of engine power, but… I would not say that the difference is very big.

But the Honda Click 160i motorcycle impressed me! With the accelerator handle twisted, the motorcycle confidently gained 120 km/h even with a passenger, and it was clear that he was not going to stop there – but I got a little scared, and I did not accelerate faster. After all, accelerating to high speed is only half the battle, and I would not like to die in a car accident. After all, the effectiveness of braking depends on the area of contact of the tires with the road. Perhaps I should not have been worried, because the Honda Click 160i has significantly wider tires, at least the rear wheel, than the 125i model. That is, the braking efficiency of this model is also greater (plus ABS). 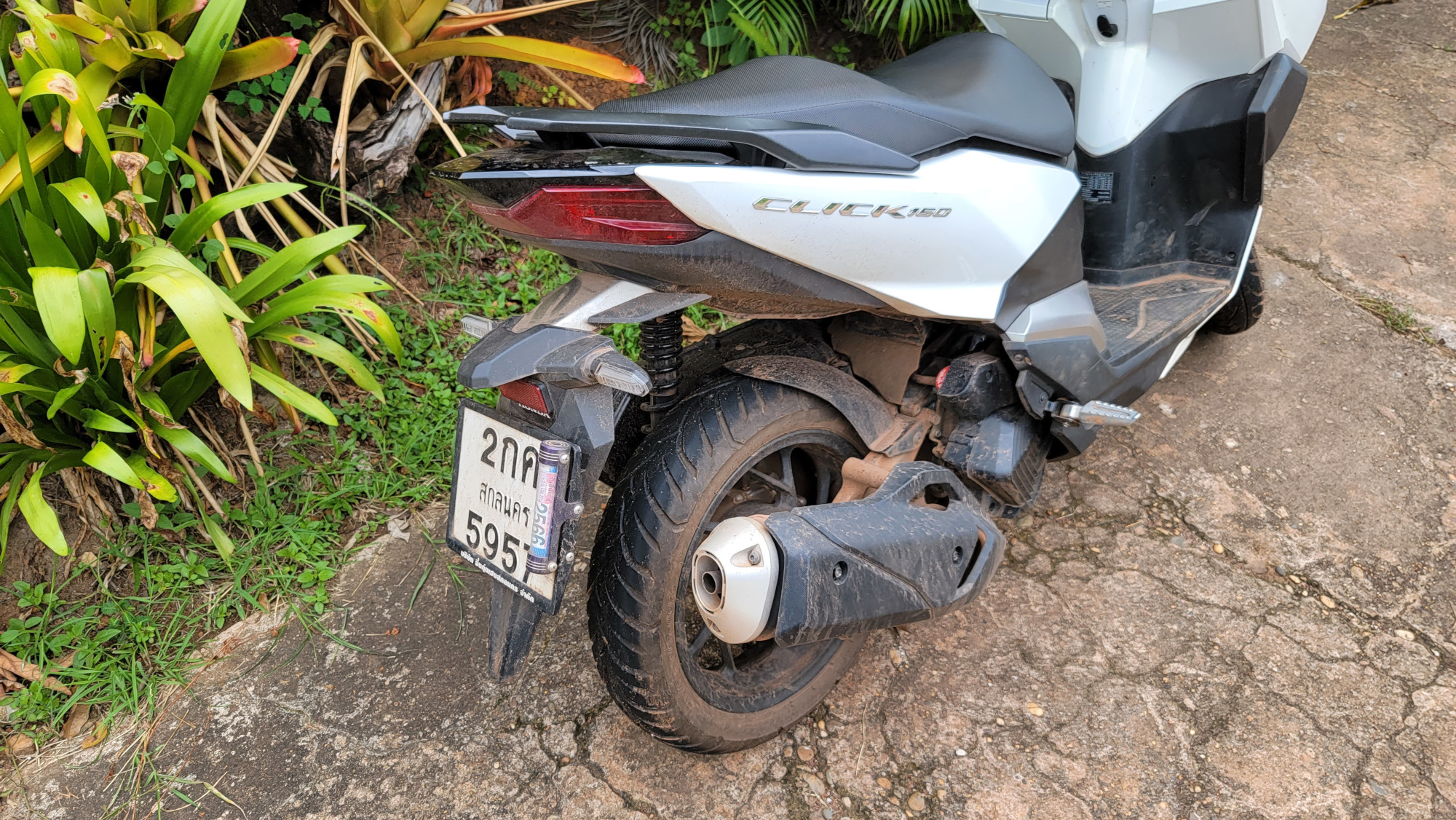 But I'm talking about acceleration at high and maximum speeds. As for acceleration from 0 to 60 km/h for the 160i model, I was left with a rather strange impression – yes, the bike is moving, but I constantly had the feeling that the bike had switched to a higher gear for some reason. That is, I did not hear the roar of the engine and I can’t tell by feel whether it was faster (instead of slower) than the 125i model. Then the bike ran up and at speeds of 60-110 km/h I felt how a huge power was pulling me forward with strong acceleration.

Perhaps slow acceleration from 0 km/h is a subjective feeling due to the fact that I did not hear the roar of the engine (my 125i immediately roars at any speed, if I twist the accelerator to the maximum). Perhaps this is some kind of internal tuning of the motorcycle – probably, few people would like their motorcycle with a powerful engine to become uncontrollable at the slightest movement of the accelerator handle in conditions of dense urban traffic. I don't know, but the fact is that it seemed to me that the 160i model accelerates worse from 0 km/h, but much more powerful at speeds of 100+ km/h.

What conclusions did I draw for myself

I want a Honda Click 160i with ABS! But not enough to run to the store for a new motorcycle right now. When it comes time to change my (currently 3 year old bike) I will choose the Honda Click with the most powerful engine available at the time – it's worth it!

https://pattaya-pages.com View more posts from this author
« What do the colors and letters at the crossroads in Pattaya and Thailand mean?
How to open a bank account in Thailand with a student visa »