How to update passport information at a Thai bank

Bank account in Thailand: what to do if you have renewed your international passport

A foreigner, when opening an account in a Thai bank, presents an international passport as an identity document (ID). This document has a limited validity period and ceases to be valid after 10 years, sometimes earlier.

It turns out that after opening a bank deposit in Thailand, if necessary, to exchange a bank card or perform other operations, you must again provide your international passport, which had already expired at the time of application.

What to do after replacing a foreign passport?

In fact, this situation is provided by the bank, and you just need to go through the procedure for updating passport information (update ID information).

You do not have to choose the main office, you can update your international passport information at any branch of the bank.

What to do if the previous international passport is not preserved

I can't really answer this question because I've never been in that situation. But I am sure that this problem is somehow solved. It may be that a new international passport in the same name, as well as a Passbook, will suffice to prove your identity.

How to update passport information at the bank if the spelling of the name has changed?

In my new international passport, in addition to changing the passport number and validity date, the spelling of my name has changed due to the fact that transliteration rules have changed in my country. At the same time, the name in my national language (which is also indicated in the international passport) remained unchanged.

First, you need to know that if you change your name or change the spelling of your name, you will need to change your Passbook. And this means that you must contact the main office of the bank in your city.

Further, the renewal procedure depends on the bank.

For example, at Kasikorn Bank, the manager decided to update my details, including my name, without additional documents and confirmations. That is, my new name was entered into the database, a new Passbook was issued to the same bank account, but with a new name, the bank card was exchanged at my request and performed other actions that I requested as the owner of the bank account.

The consulate immediately understood the essence of my problem and issued the necessary document on the day of application. 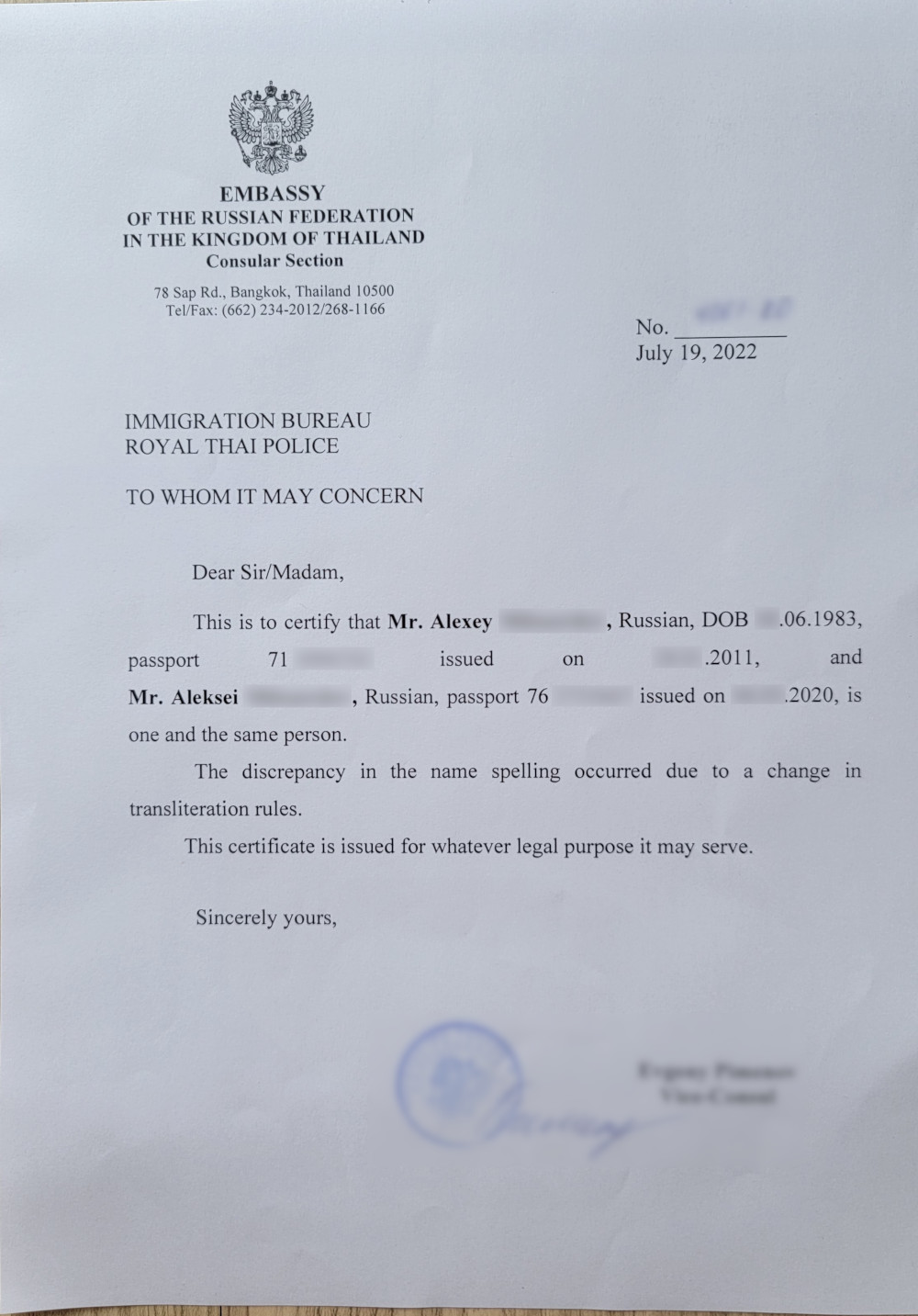 How to update the information about the passport in the bank if the name or surname has changed?

If you really changed your first or last name, then as an easier option, I would suggest that you open a new bank account. If this does not suit you, then you need to present a document (certificate) confirming the name change. If this document is in your national language (not English), then bank employees are unlikely to accept it without translation.

Even if the name change documents are in English, the bank has the right to require them to be translated into Thai and legalized by the Department of Consular Affairs – the final decision depends on the policy of the bank and the individual bank manager.

The fastest and cheapest way to fund a bank account in Thailand from abroad is the PaySend international money transfer service – download this application for your phone or go to the official website: https://paysend.com/

To make a transfer from abroad without commission in PaySend, specify the invite code: 0d8425

https://pattaya-pages.com View more posts from this author
« How to get married in Thailand
Pattaya bus stations »