The main bus routes are Pattaya and Jomtien. Created by Pattaya-Pages.com. Don't worry if the bus turns off the desired route, just press the bell button, pay fare to a driver or a conductor, and after walking a few meters catch another one coming your way.

Running up and down the North Pattaya road. Tuk-tuks does not go here very often. One of the stops is near the Best supermarket located on North Street, next to the intersection with Naklua. The final stop is the intersection of North Street and Sukhumvit Highway. This is a circular route, the fare, regardless of the distance, is 10 baht. Another route departs from the Northern Bus Station, runs along North Street, then along Beach Street and to the final stop at Walking Street. The fare is 20 baht.

The stop is located at the beginning of Central Street, at this point it intersects with the Sukhumvit Highway. Passing the entire Central Street, tuk-tuk go to Beach and reach Walking Street, then go to Second Street and turn back to Central Street. The interval of movement is about 15 minutes.

The starting stop is the intersection of Sukhumvit Highway and South Street, and the final stop is at the Chaimongkron Temple, also located on South Street. Tuk-tuk pass through the entire South Street, then go along the Second Street, at the Dolphinarium they turn to Beach Street, go through it all and return again to South Street.

There is also a route that runs around the ring, exclusively along South street, without turning anywhere.

Here, the movement of passengers is provided by two routes. Both of them start from the southern end of Naklua Street and move north. At the end, the Naklua turn around and drive south, turning onto North Pattaya Street.

After driving 200 m, they turn around and drive towards the Dolphinarium.

Then one of the routes returns to the starting stop on Naklua street. And the second route runs through the entire Beach road, turns onto the Second road and returns to the final stop.

Movement is carried out along the ring, from the side of Jomtien, the parking lot is located in the southernmost part of the Jomtien district. From Jomtien, songthaews move along the sea coast, passing the entire beach. Then they turn onto Tappraya Street, drive through it all and arrive at the final stop in the Walking Street area. Some routes turn onto Second road. Then they turn to Beach road near the Dolphinarium and move in the opposite direction to Walking Street. Then they turn onto Second road again, stop at the school. Here they have planned a short stop, designed to fill the cabin with passengers on their way to Jomtien. If you move within one area, the fare is 10 baht, if you need to get to another – 20 baht.

Up and down Threp Prasit Road. The Threp Prasit route is designed for passengers going to the night market. Therefore, tuk-tuk runs here only from Friday to Sunday. The rest of the time, if necessary, you will have to take a taxi.

Up and down Soi Buakhao. When reaching Pattaya Klang (Central Street), the tuk-tuk turns right and goes to the Sukhumvit highway. Then it turns around and drives along Central Street to Soi Buakhao and turns onto it.

White tuk-tuk runs on the Sukhumvit highway. They don't go deep into Pattaya. In them the fare is 20 baht. This route is not indicated on the map in this article.

There are several tuk-tuk stops on each route. These are some kind of end stations, but there can be more than two of them. The main goal, apparently, is to recruit enough passengers to recoup the cost of the ride. When the tuk-tuk fills up, the car starts.

How to get to Jomtien by Tuk Tuk 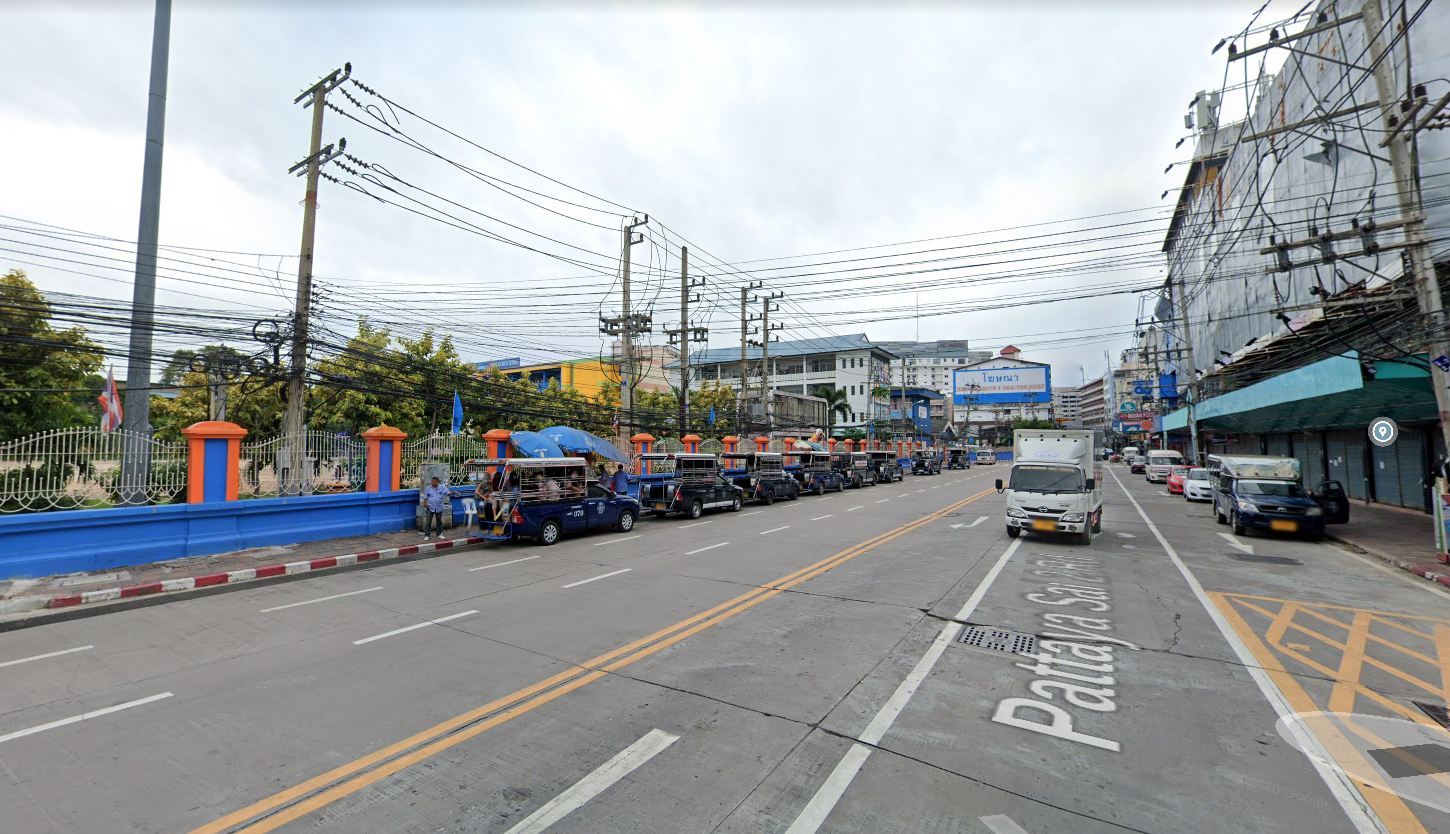 Location on the map.

To get to this place, you can use the routes:

How to get to the city from Jomtien on Tuk Tuk

There are buses to the city that you can meet on Thappraya Road, Soi Jomtien 1 and Jomtiensaineung Road.

How to get to the roundabout with Dolphin on Tuk-Tuk

You need the Main Circle Route. Board the tuk-tuk moving along the 2nd Beach road. If it turned out to be a route along Central Street, then you will have to change cars.

How to get to North Pattaya by Tuk Tuk

You need one of the following routes:

To board any of them, you need to get to the roundabout with the dolphin. To get here, use the Main Circle route.

How to get to Sukhumvit highway on Tuk Tuk

There are four routes to Sukhumvit at once, you can choose any of them depending on where in Sukhumvit you need:

For the first three routes, you can change from the Main Circle route. And the Threp Prasit Road can be accessed from the South Pattaya Route to Jomtien.

Do you want to add or clarify something in the information provided? Great, just write your opinion in the comment – it will help other users!

What is tuk-tuk in Thailand 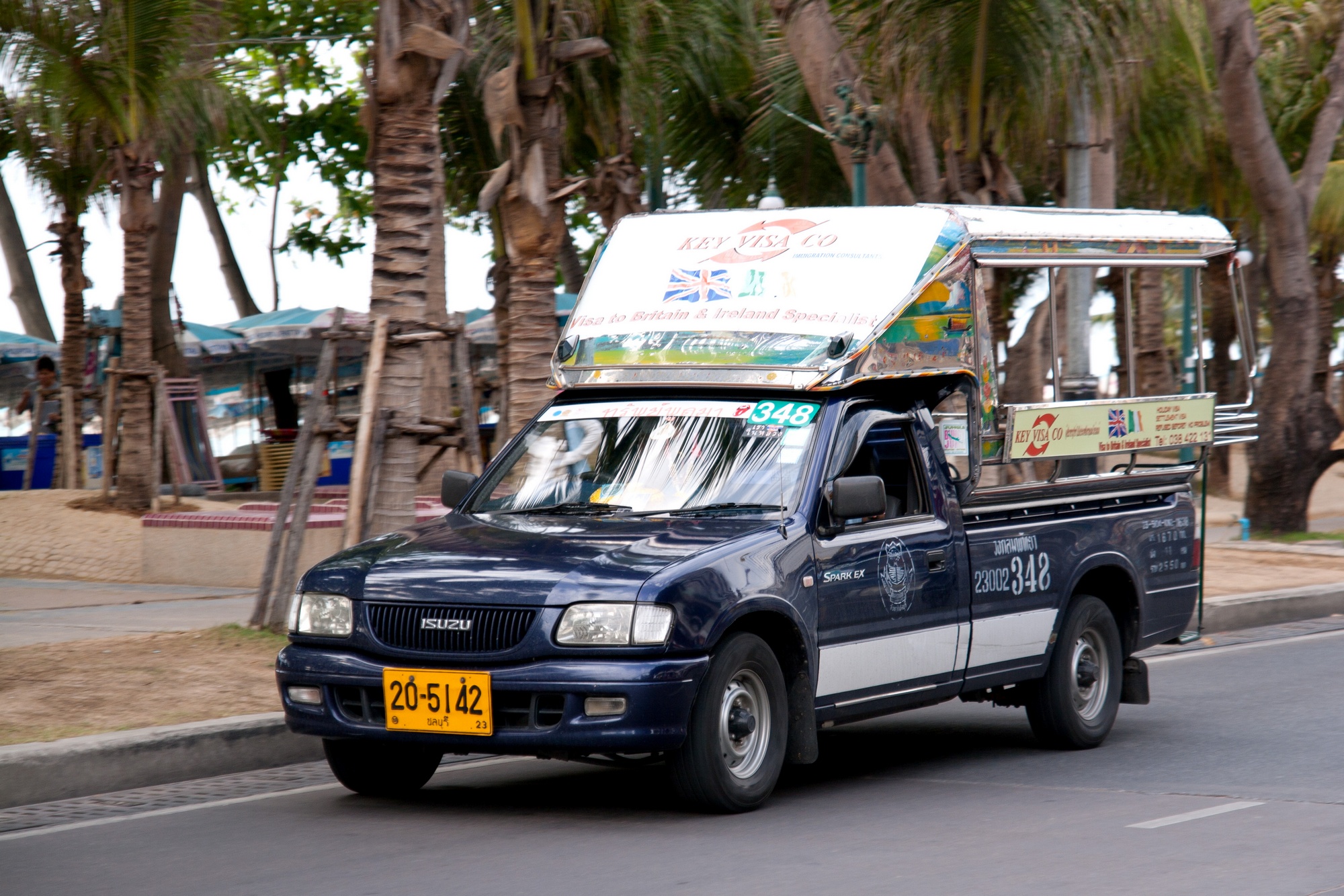 Public transport is well developed in Pattaya – many cars are constantly running around the city, acting as shuttle buses. They are called tuk-tuk or songthaew. Tuk-tuk are Japanese pick-up trucks converted for passenger transportation. In front is a cabin, like a car. A conductor may sit next to the driver. Behind – a body with a roof and handrails, side walls without glass. Along the two sides, there are two parallel benches for passengers, which can accommodate 10-12 people.

There is a platform step at the back, through which it is convenient to climb into a tuk-tuk. It can also accommodate several passengers if there are no empty seats on the benches.

In Pattaya, they are dark blue.

The word songthaew (by the way, in Thai it means “two benches”) is more difficult to understand and pronounce, so in everyday life they often say tuk-tuk.

Moreover, some Thais even explain that the word songthaew is a wrong name for minibuses in Pattaya, since it refers to smaller cars, for example, such a three-wheeled one (you can see them in the Thai province).

In old sources, you can see such a name as “baht bus”, but in recent years no one has used this name and it is not understood or known even by Thais. 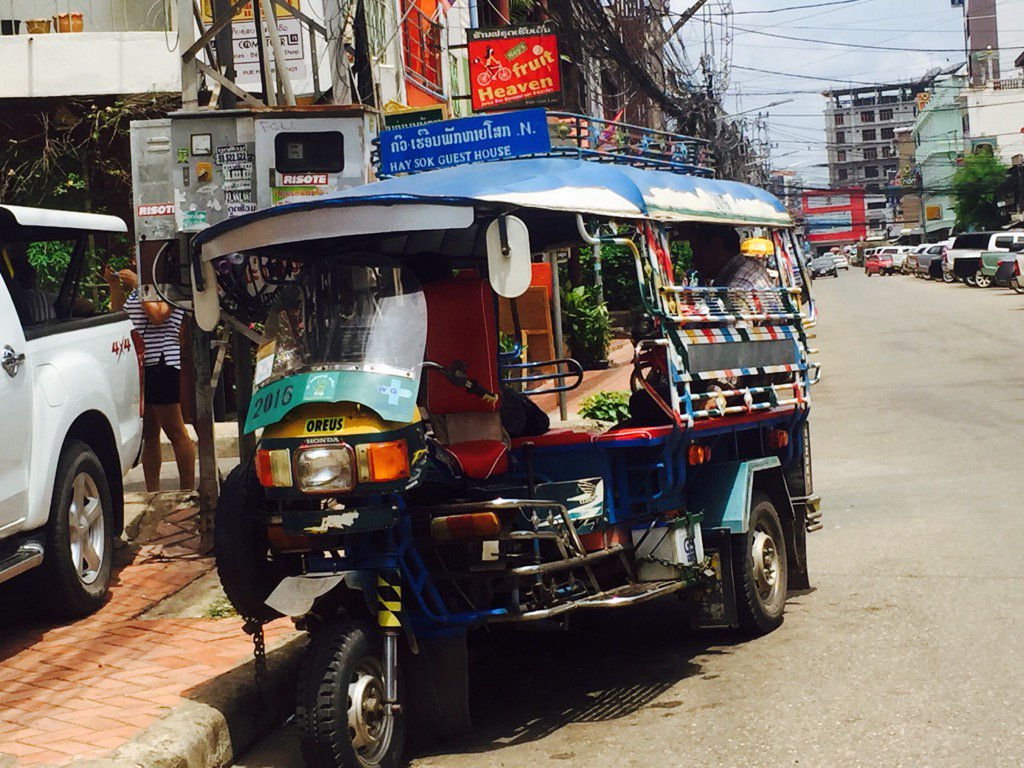 Almost all routes have points of contact, so by public transport, having made 1-2 changes, you can get to all the main areas of Pattaya.

Tuk-tuks don't work around the clock. The active flow of shuttle buses starts at about 7-8 in the morning and ends at 7-8 in the evening.

But not all tuk-tuk go home – they continue to work, but already as ordinary taxis. The fare increases from 10 baht to hundreds of baht.

How to determine the tuk-tuk route. How to distinguish a tuk-tuk from a taxi

The answer to both of these questions is no way. Tuk-tuk have unique numbers, but they refer to the car park, not the routes. In addition, the same car at different times of the day can be both a shuttle bus and a taxi.

The most obvious sign that a tuk-tuk is driving along the road is a short beep that the driver gives to everyone who walks along the road.

Another sure sign is tuk-tuk in the parking lot for tuk-tuk, in which people began to gather, these are also route cars.

The tuk-tuk route can be guessed based on where you met it. Exceptions are roads where several routes intersect. For example, on Beach road and 2nd Beach road, tuk-tuk of the following routes pass:

If on the 2nd Beach road you got on a tuk-tuk hoping to come to Central Pattaya, and the car crossed Central Street and went to the North, then just press the bell button, get out, pay and go to Central Street in search of a new tuk-tuk…

If you see a tuk-tuk, or it beeps at you, then raise your hand so that the driver understands that you want to go.

There is no limit on the number of passengers. There are about 8 seats, you can stand, but the car has a low roof. You can hang on the footrests.

When you have arrived at your destination, press the bell button. The driver will hear it in any case, but he can stop either immediately or, based on the traffic situation, with some delay.

Walk up to the cab and pay 10 baht for the ride.